Hugh and Den - those lovely guys in High Wycombe?

No, Hughenden - just a mile or two down the road!

Hughenden was the Buckinghamshire home from 1848 to 1881 of a former Prime Minister of Britain named Benjamin Disraeli.

Disraeli - 'Dizzy' to his friends - was a Conservative politician. He served twice as Prime Minister - from February to December 1868 and again from February 1874 to April 1880. His achievements were many and various - Click the link above on his name to see just how many and various they were. Suffice to say, he has a well-deserved place in the history of Great Britain. 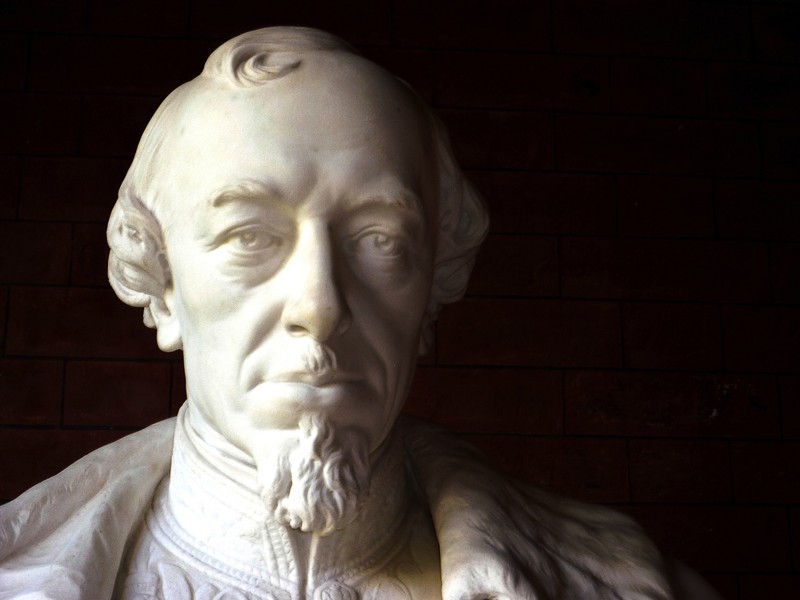 A middle-class man of Jewish birth, Disraeli rose to become one of the most respected politicians of his era. On becoming PM for the first time, he told those who came to congratulate him: 'I have climbed to the top of the greasy pole'. Indeed, it was tough for anyone not from the upper echelons of society to enter politics in those days and doubly difficult if you weren't a Christian. Members of Parliament at that time had to swear an oath of allegiance 'on the true faith of a Christian'.

How amazing is it then that his father had the foresight, after falling out with his synagogue, to convert his family to Christianity when Benjamin was only 12 years old? Interestingly, he remains our only Prime Minister of Jewish birth to this day. Times have changed but, who knows, our current (March 2014) Leader of the Opposition, the Labour Party's leader, Ed Miliband who describes himself as 'a Jewish atheist' - could have been the next...!

Disraeli cultivated a friendship with Queen Victoria. 'Everybody likes flattery; and, when you come to royalty, you should lay it on with a trowel', he once said. He quickly became a favourite of the Queen and, at the end of his first term of office as PM, she offered him a peerage, which he refused as he wanted to remain in the House of Commons, where his experience then lay. Instead, he had the Queen create his wife, Mary Anne, Viscountess of Beaconsfield in her own right. In 1876, Victoria repeated her offer and Disraeli was duly elevated to the House of Lords as Earl of Beaconsfield and Viscount Hughenden. 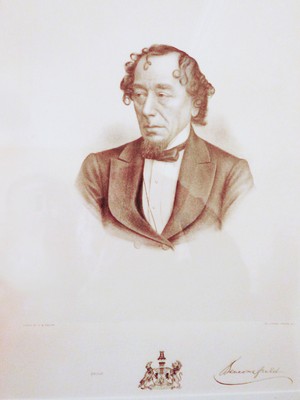 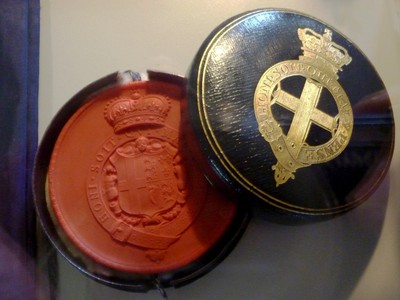 As one of humble origins, the new Earl had none of the finery that goes with aristocracy and had to set about correcting that. He adopted as his motto the Latin 'Forti Nihil Difficile', meaning: 'To the determined, nothing is difficult'. He also commissioned a coat of arms - see photo of it below painted on a carriage door (the door also has a story - read on...). 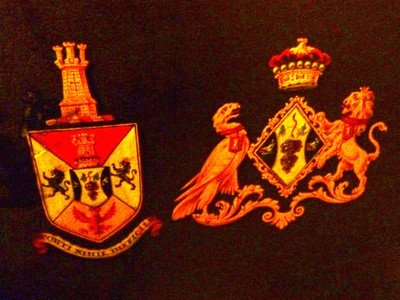 Coats of Arms have a detailed - and, to some, meaningless - formal specification. In this case, it's: Per saltier gules and argent, a castle, triple-turreted, in chief proper, two lions sable in fess sable, and an eagle displayed in base or. Crest: Issuant from a wreath of oak a castle, triple-turreted, all proper. Supporters: Dexter, an eagle; sinister, a lion, both or, and gorged with a collar gules, pendent therefrom an escutcheon of the last, charged with a tower argent.

You might understand the heraldic gobbledygook if you read the above at the same time as looking at the coat of arms shown on the left of the picture (the arms on the right belong to Dizzy's wife). You could decipher some of it by searching the Net - as I've had to - but, to save you time, here are some clues: 'per saltier' = a diagonal cross on a shield with four sections, 'gules' = red (the colour follows the item to which it refers), 'argent' = silver or white, 'chief' = in the upper third, 'proper' = in natural colours, 'sable' = black, 'fess' = a horizontal band, 'in base' = the lower part of the shield, 'or' = gold or yellow, 'dexter' = the right hand side of the shield (the left as viewed), 'sinister' = the left side of the shield (right as viewed), and finally 'an escutcheon of the last' in this instance (I think) relates to the shield containing a bunch of grapes, which also appears on the coat of arms of the holder's wife.

Looking at this closely, some elements of the specification seem incorrect, but it's all archaic nonsense anyway - something us Brits do rather well! 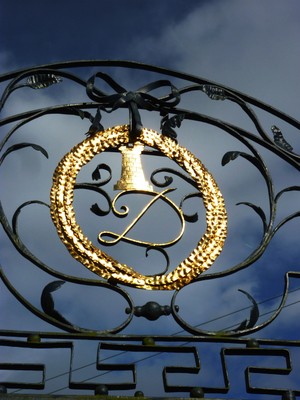 The original entrance gate. Adorned with part of Disraeli's coat of arms.


Now let me return to the story of the carriage door.

First though you need to know that Disraeli was constantly in debt. He invested badly in mining shares - with borrowed money, and added further to his borrowings for the purchase of houses befitting a senior politician, notably sizeable homes in London and a country manor, Hughenden. The debts mounted despite royalties from his writing of over twenty books, the best known of which are probably his first, 'Vivian Grey', a novel which followed its eponymous hero from childhood into the world of politics, and his last, 'Endymion', an exposition of his economic policies and political beliefs. 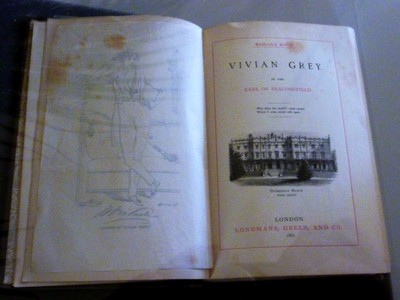 An original copy of Disraeli's first novel in his library.

While Disraeli was busy forging a political career, writing books and losing money, one Mary Anne Evans married one Wyndham Lewis, a wealthy shareholder in a Welsh ironworks, who became the Member of Parliament for Cardiff and a close colleague of Disraeli's. A year or so after Wyndham Lewis's sudden death, Mary Anne married Disraeli - who, of course, was delighted to spend the wealthy widow's money paying off his debts! It has to be said, however, that they did actually become a devoted couple - and herein lies the tale of the carriage door. Hooray, we got there eventually! 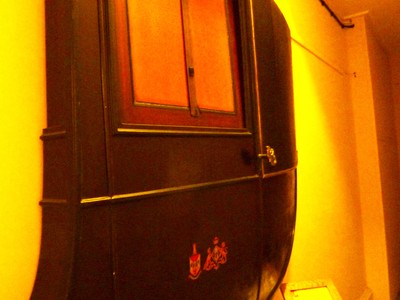 One day in 1852, Mary Anne accompanied Benjamin in his carriage to the House of Commons. Disraeli was about to make one of the most important speeches of his career. On arrival, the nervous Disraeli slammed the carriage door, unaware that Mary Anne's hand was in it! She didn't utter a sound because she knew this would have disturbed his train of thought and he'd have worried all day about how badly she was hurt. So, when he said goodbye, she merely smiled, ignored the pain and told the coachman to drive on. As soon as Dizzy was out of sight, she asked the coachman to stop and release her hand. Disraeli only learnt of this some while later but never forgot how much he owed Mary Anne. When the carriage was no longer serviceable, the door was taken off and hung from a wall in the house!

Mary Anne, many years Disraeli's senior, was never under any false illusions though.

'Dizzy married me for my money,' she once said, 'but, if he had the chance again, he would marry me for love'.

She clearly admired and adored him. Once, when Disraeli returned home late at night from his gentlemen's club after celebrating a political triumph, he found Mary Anne waiting up for him, complete with a bottle of champagne and a Fortnum & Mason's pie. He then famously remarked: ‘Why, my dear, you are more like a mistress than a wife'.

And, when she lay dying of stomach cancer in 1872 at the age of 80, Mary Anne, urged by a priest to turn her thoughts to Jesus Christ, said she could not: 'You know Dizzy is my J.C.'. 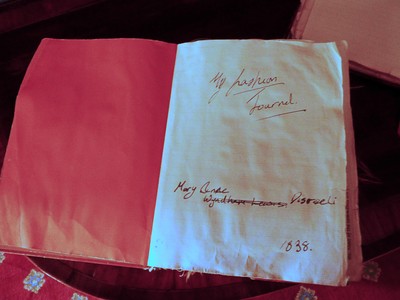 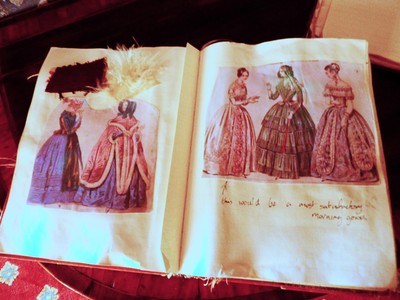 Mary Anne's journal of the finest fashions of the day

Disraeli himself died in April 1881, aged 76. Suffering from asthma and gout, he had seldom gone out and, when he fell ill with bronchitis, which was to prove his final sickness, friends and opponents alike came to call. He declined a visit from the Queen saying: 'She would only ask me to take a message to Albert!' (Explanation for those not familiar with Albert: Queen Victoria's beloved husband and Prince Consort, Albert, had died in 1861).

Disraeli was buried, with Mary Anne, in a vault at St Michael and All Angels Church downhill from the house. Protocol prevented Queen Victoria attending his funeral but she sent primroses, his favourite flowers, and visited the vault to place a wreath a few days later. Inside the church, there's a memorial placed there by Queen Victoria, the only instance of a reigning British monarch erecting a memorial to a subject. 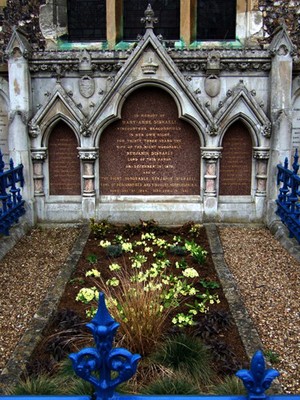 So, there you have some of the historic background to Hughenden Manor. The manor house itself is a red-brick Victorian pile set on a hill amid the rolling countryside of the Chilterns. Originally built in the late-18th century, it was remodelled in the 1860s and extended in 1910, long after Disraeli's death, when the house was owned by his nephew Coningsby Disraeli.

It has three floors with the reception rooms all on the ground floor, many of them overlooking the south-facing terrace and the grassy parterre. It's decorated throughout as it was believed to have been at the time Disraeli lived here. There are original furnishings and family portraits, and the library contains a collection of Disraeli's novels and one written and signed by Queen Victoria. 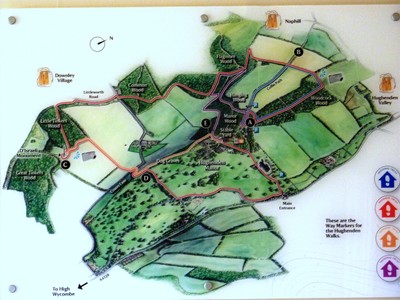 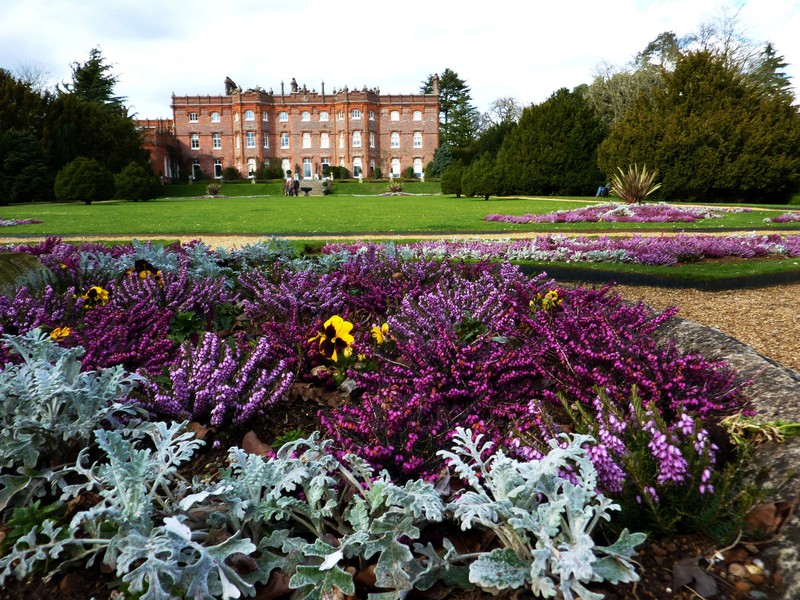 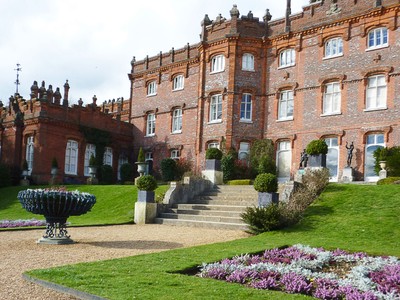 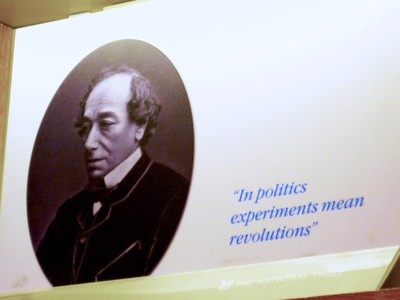 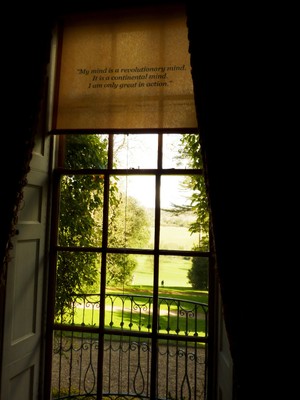 Disraeli's quotes are scattered throughout the house, including some on blinds - this one
says: 'My mind is a revolutionary mind. It is a continental mind. I am only great in action.' 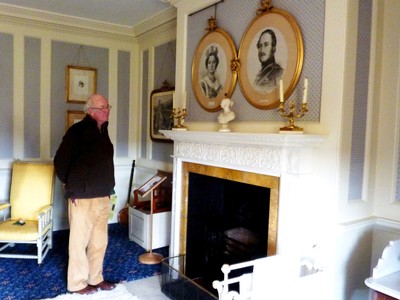 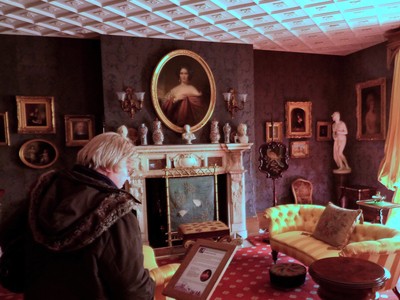 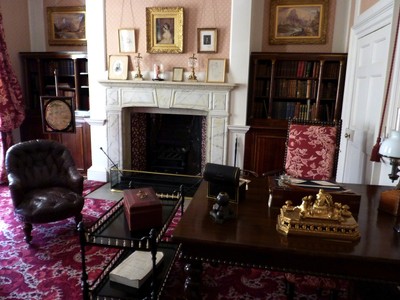 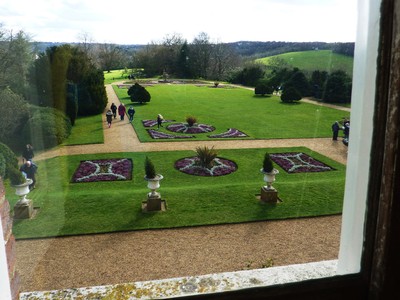 There are more than 1,500 acres of park and woodland, and an attractive formal garden that Lady Beaconsfield, Mary Anne, originally designed herself. Hughenden was made over to the National Trust for the benefit of the nation in 1947 and the gardens have now also been restored to a similar condition to when the Disraelis were here. 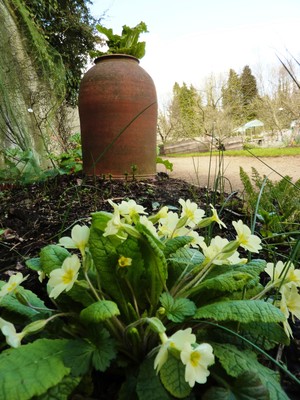 Disraeli's favourite flower, the Primrose, seen here in the walled garden.
In the background, rhubarb is being forced beneath a bell-shaped terracotta pot. 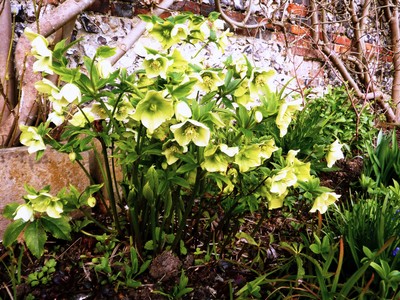 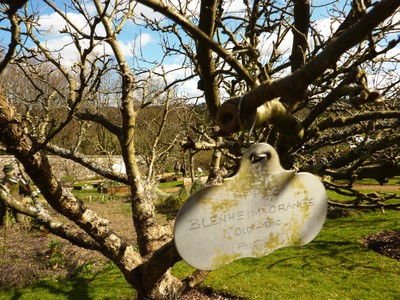 Hughenden had a modern-day secret that was only revealed in recent times. During World War II, it was used as a secret intelligence base, code-named 'Hillside'. In the basement here, Air Ministry staff scrutinised aerial photographs of Germany and created maps for bombing missions, including the famous and very successful Dam Busters raid. Examples of the maps and other war memorabilia are exhibited there now. 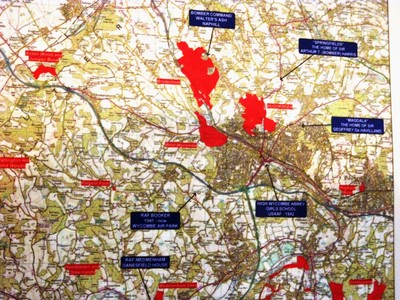 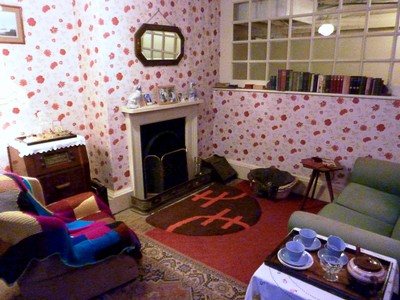 This is the basement room in which the family took shelter during air raids in WWII. 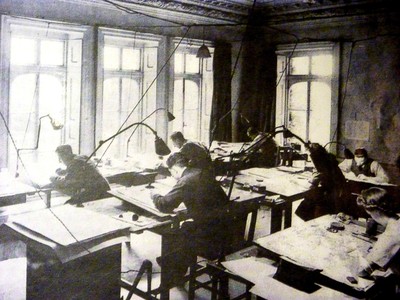 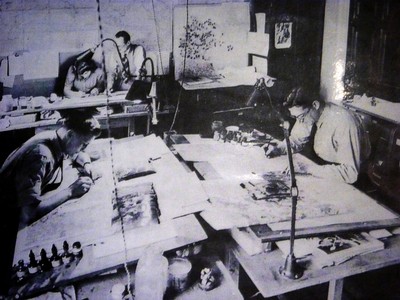 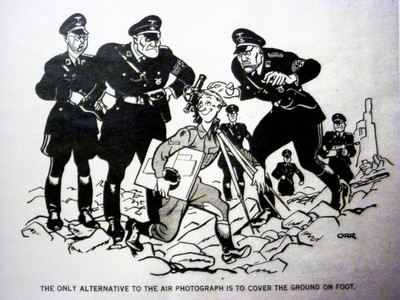 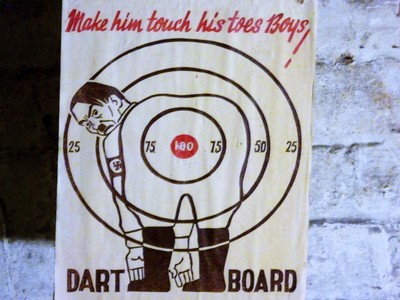 The map makers were also artists!

I'd like to end this tale with something that Disraeli said upon being asked to offer advice to the young son of a Member of Parliament and which could be just as relevant to all writers of blogs today:

'Be amusing; never tell unkind stories; above all, never tell long ones.'